Nathan JonesMarch 21, 2018Leave a comment on Soon, a 3D printer to “print” your new teeth to replace those that are broken!Blog Dental Problem Health

You may no longer have to wait for days and months for dental implants as soon as your dentist will be able to quickly scan your jaw and “print” your new teeth using a rapid prototyping machine known as 3D printer.

Researchers in Iran have explained how medical imaging coupled with computer-aided design could be used to create a perfect fit model of dentures, whether to replace diseased or broken teeth and even the jaw. 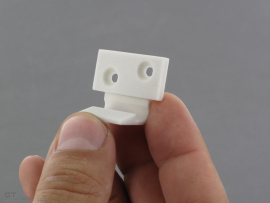 The model can then be introduced into a 3D printer to then build an exact replica using a composite biocompatible material.

Such technology has already been used to create medical prostheses, but it is an early step for dentures using rapid prototyping.

This sculpts the appropriate solid form from a polymer block, but has several disadvantages, the highest being that it is very difficult to carve a complex shape, such as a tooth. In contrast, rapid prototyping uses a 3D image held at a computer to control a laser that then “cures” polymer powder or liquid. Almost any solid, porous or complex form can be produced by this 3D printing technology.

The Iranian team has now demonstrated how rapid prototyping can be used to make dental objects such as implants and crowns quickly and easily, even when features such as overhangs, sharp corners and undercuts are needed.

The team points out that the most appropriate medical imaging technology, CBCT (cone beam computed tomography), which is lower than cost and exposes the patient to a lower dose of ionizing radiation is best suited to the generation of assisted conception. by computer for the creation of such dental objects ready for printing.

Here are some fun dental facts to share with the entire family!